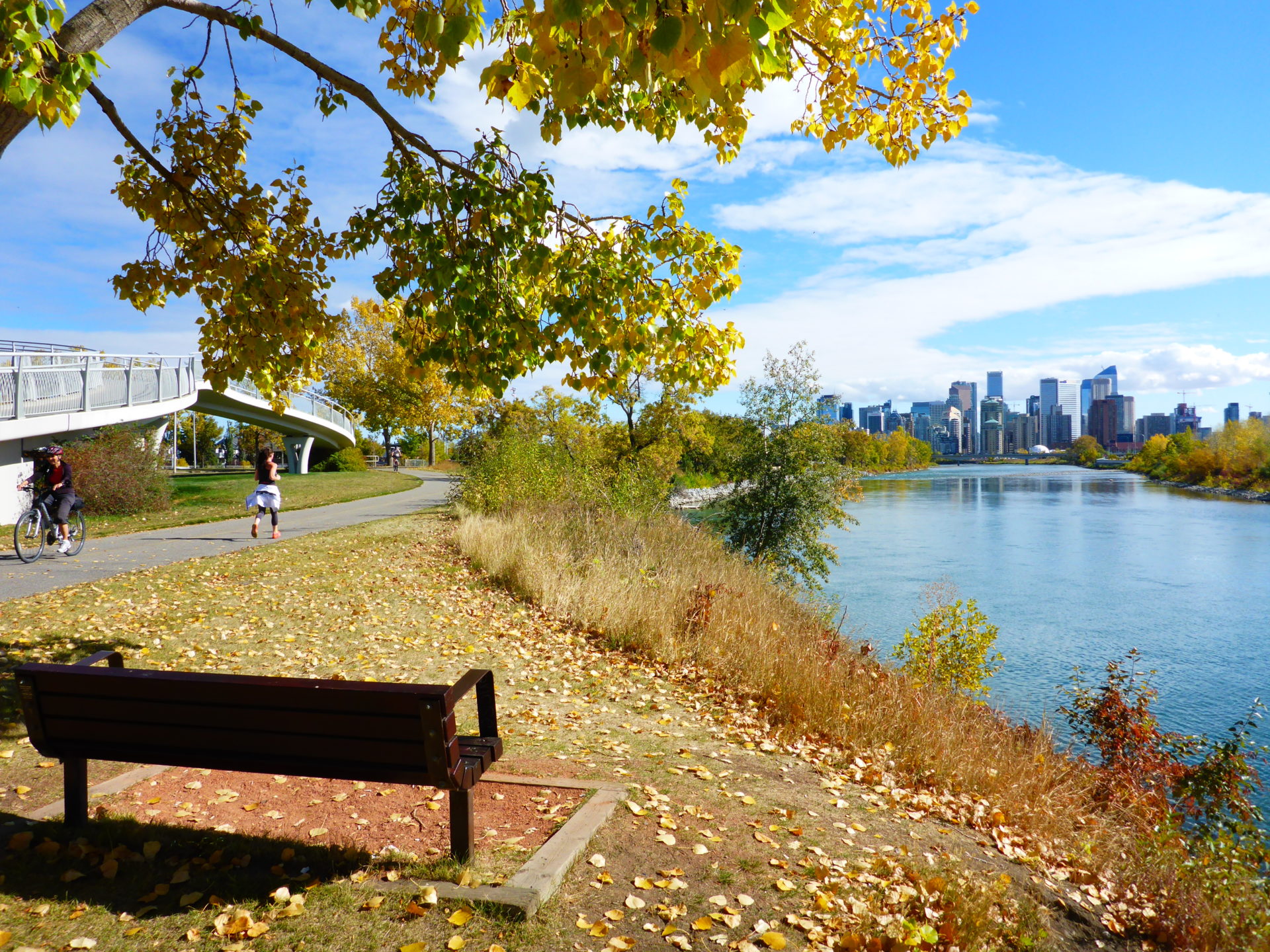 As the extended summer season of 2017 drew to a rapid close and the onset of fall was imminent I suddenly become aware of how much outdoor activity there was to still enjoy and how little time remained to enjoy it before we had to layer up with thermal underwear and restrictive padded overlayers.  I was fortunate enough to seize a widow of opportunity to take a detour one day and went off to briefly re-explore a small portion of the Bow River Pathway system.

The entire Bow River Pathway network extends from Bears Paw Dam and the community of Valley Ridge in the northwest to the eastern edge of Fish Creek Provincial Park and the community of Cranston in the southeast, connecting numerous parks and communities on either side of the Bow and Elbow Rivers along the way.  It is currently estimated that this part of the Calgary pathway system spans 48km of networked paths.  I only ventured out and did a short 5km stretch near downtown to remind myself of the amazing infrastructure we do get to enjoy as a City along with the beauty of being out on an unseasonably warm fall morning!

I joined the pathway, along with my bicycle, at the intersection of Memorial Drive and 10th St NW at the historical Old Firehall #6 and Poppy Plaza, commemorating the Veterans who have served Canada.  I headed west, tracking along the north shore of the Bow River between trees aflutter with golden leaves.  The vivid colours against a mostly blue sky were just breathtaking.  I couldn’t keep myself from frequently pulling over and snapping away with my camera in a feeble attempt to capture the beauty.  The pathway, tucked between the north shore of the river and the ever-busy Memorial drive follows a gently undulating pathway, sometimes shared with pedestrians and sometimes diverging into a dedicated cycle lane.  It was close to the lunch hour, so I was sharing the pathway with several other cyclists, runners and strollers, all soaking in the fading warmth of the September sun.  Well signposted boards along the pathway notify users of pending work and detours to the path.  At 14th St NW an overpass allows one to cross the river to join the parallel pathway that tracks along the south bank of the river or remain on the north bank, as I elected to do. 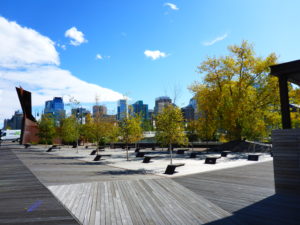 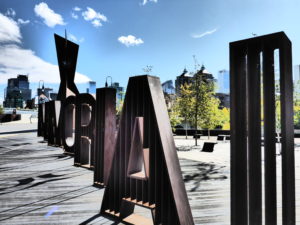 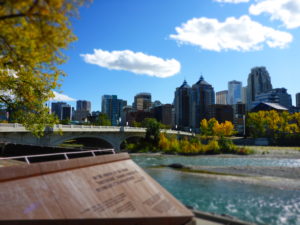 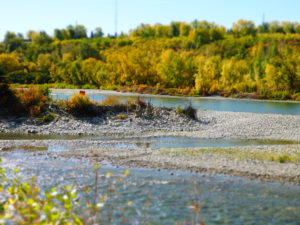 During the summer months this section of the Bow River frequently sees adventurers rafting or tubing downstream.  The latter part of summer and into the fall months does result in low water levels on the Bow, since the ice packs in the mountains have melted over the summer.  As a result inexperienced river paddlers are at greater risk of scraping their kayaks or tubes against rocks in the shallow waters.  Exposed islands frequently have noticeable rock piles piled into iconic Inuksuks on their shores erected by users of the Bow during the warmer months. 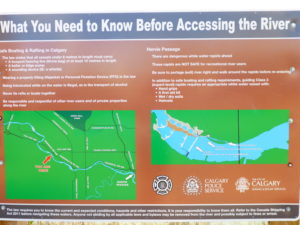 “Floating the Bow”, as this is often referred to by Calgarians, is a great shared group activity but does require knowledge of the rules and regulations governing the recreational use of the River.  The waterways are patrolled by City Officials who frequently fine lawbreakers for contravention of the law, misuse or abuse of the River.   The Calgary Fire Department offers some invaluable advice and guidelines to familiarize yourself with before undertaking this fun-filled family-friendly activity.  An information board outlining the safety guidelines is also available for river users to review at MacKay Point adjacent Angel’s Cappuccino & Ice Cream.  This is one of many common access points to the river for rafters, kayakers and boaters, although one can put in anywhere upstream or 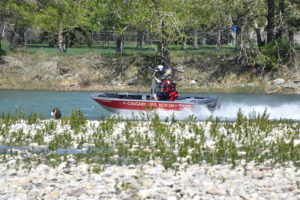 downstream of Downtown, but users need to familiarize themselves with dangers of the river such as overhanging trees, rapids, barriers, and bridge pylons that cause swift currents and treacherous eddies.  It is strongly recommended that inexperienced river users exit the river before the Zoo well ahead of Harvie Passage where a weir requiring Class II and Class III white water paddler competency is located.  Portaging facilities do exist on the south shore of the river at this point to enable River users to bypass the rapids and continue floating the Bow downstream. I’ll review a personal encounter of “Floating the Bow” in a later Blog entry.  Click here to encounter a fun-filled 2 hour paddle down the river in 60 seconds!  A helpful map of launchsites is available here. 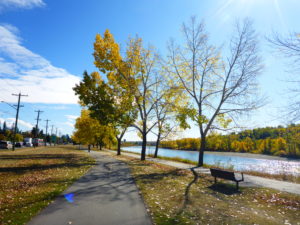 I terminated my short cycle at the soon-to-be-renovated Angels Cappuccino and Ice Cream, a neighbourhood-favourite and local icon, across the river from the sprawling and historic Edworthy Park.  I love popping in here because of the location right near the river bank.  It’s therapeutic sitting on a bench watching the birdlife, listening to the rush of the water, or watching a 50+ car Canadian Pacific Railway freight train pounding the rails on the opposite shore of the river heading to the Rocky Mountain passes and the distant west coast.

One day I’ll embrace the challenge and cycle the full length of the Bow River Pathway.  But until then I can quite confidently say that the little segments I’ve encountered have been extremely enjoyable, beautifully maintained and offer diverse skill levels and family-friendly activities along it’s length, including exercise parks, barbecue and picnic facilities, outdoor art, off-road cycling, eating and beverage stop points, and innumerable great photo opportunities to record your memories … or to capture your hard exercise efforts!  Be sure to take an opportunity to identify a section of the Bow River Pathway, get out there and enjoy it, regardless of the season! 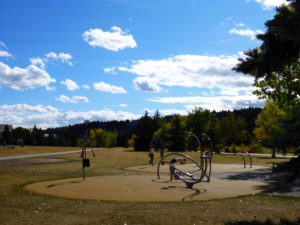 Exercise park adjacent to the pathway at Point McKay 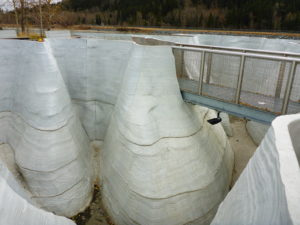 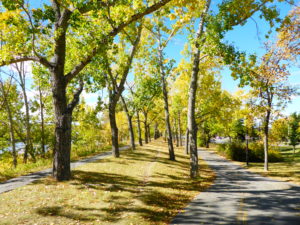 Divided and single lane pathways stretch the length of the Bow River Pathway system, sometimes straddling both shores of the River, enabling outdoor lovers to take in the beauty of the surrounding in the heart of the City and neighbourhoods 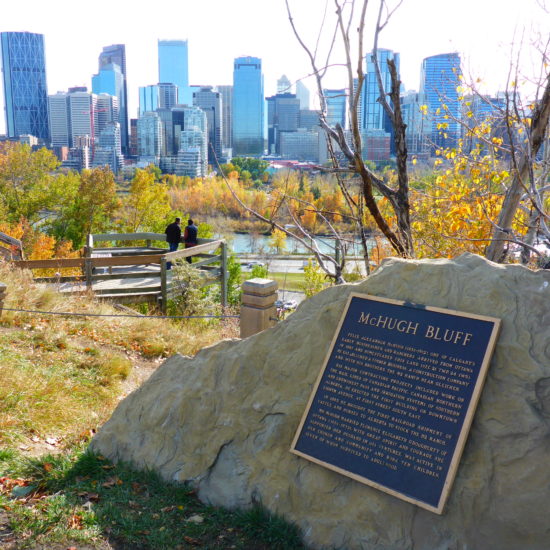 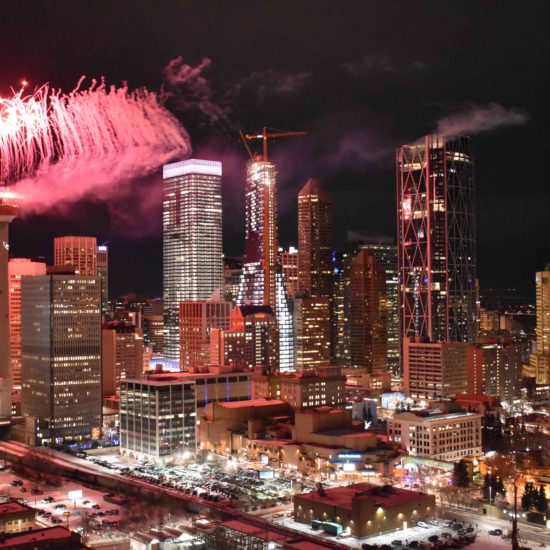 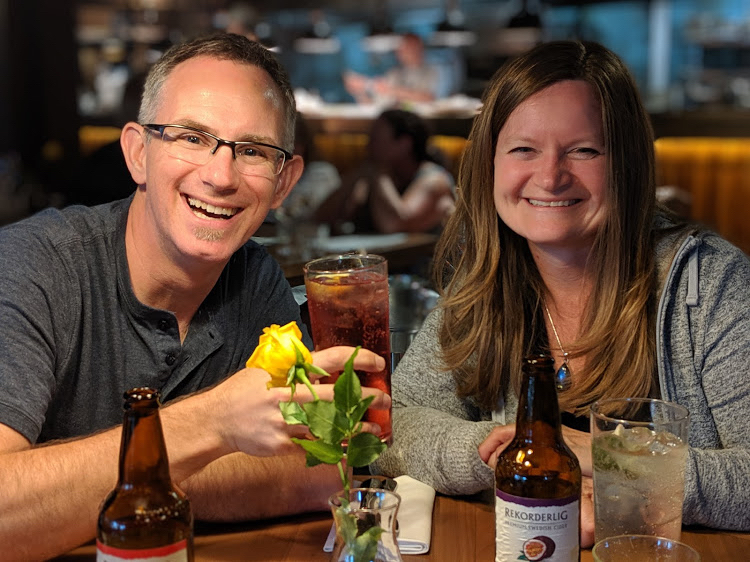