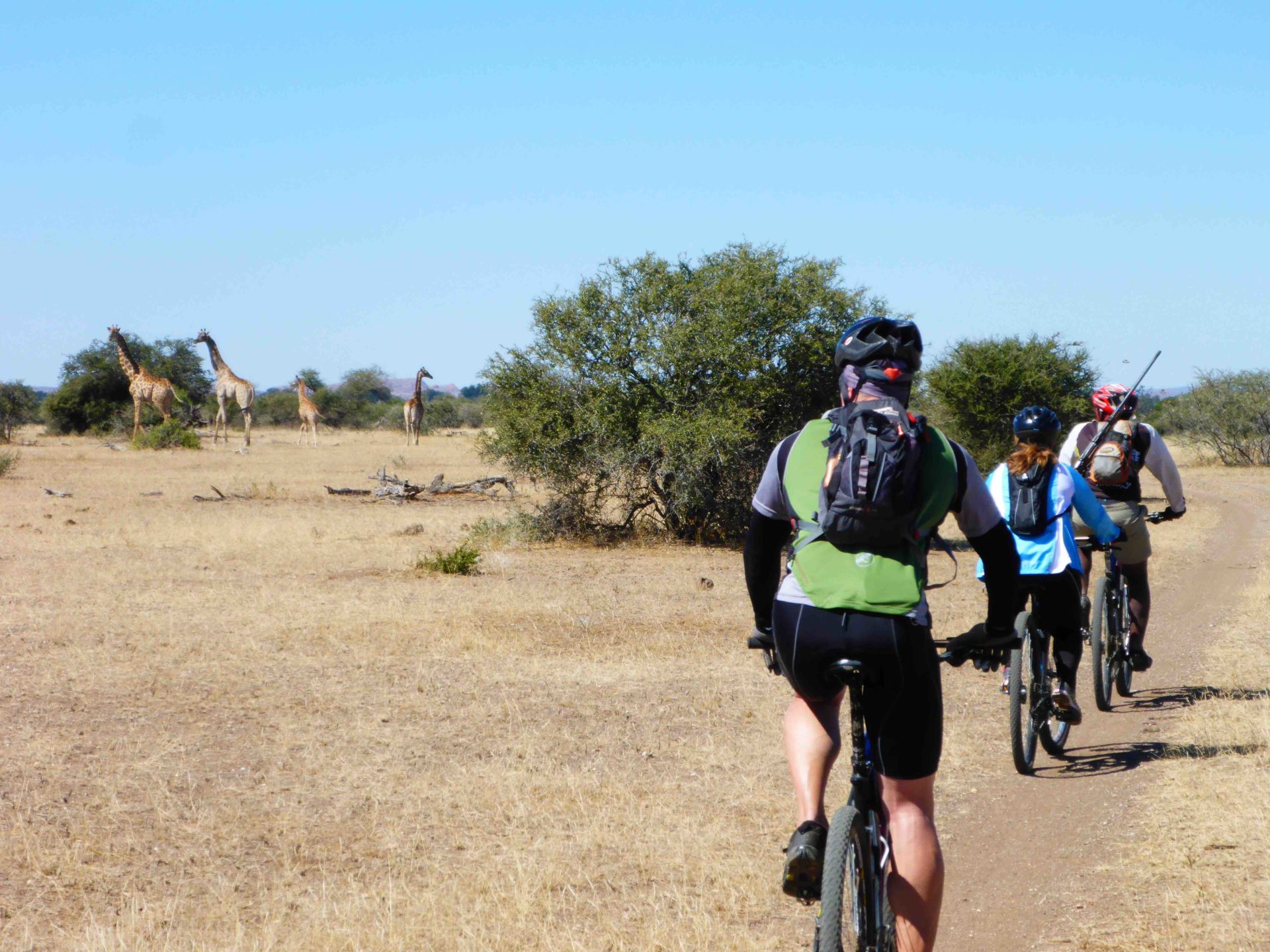 If you fall off a bicycle …

They say that if you fall off a bicycle the best thing you can do is face your fears, re-mount that beast and ride it hard again.  I don’t know who “they” is, but that’s the same as what we had to do on Day 2 of our Botswana Cycle Mashatu safari adventure.  Facing that mechanical beast for a second consecutive day of riding, when you’re not used to being in the saddle on a paved road, much less off-road, is pretty much the same as having to get back on a bicycle just after you’ve fallen off of it!  It’s pretty daunting and not much fun.  But the reality is, all you can do is grit your teeth and bear it!  Oh, and a little Ass Magic seemed to help considerably, too.  The soothing benefits of this anti-chafe sports cream might have been purely a placebo effect, but just spreading something mollifying on our sensitive basal areas seemed to offer some pre-emptive and short-term relief!

If you missed it, you can read about our arrival and first day antics on our Botswana Cycle safari in our earlier blog.

The morning after the night before.

After our first night’s wild weather and winter chill, we were woken at 7.15am by the muffled sound of staff activity in the camp, the aroma of camp coffee in the air, a magnificently clear morning, and the intimidating prospect of having to remount those bicycle saddles to kick-start Day 2!  We emerged from our tent, lathered with ass magic and layered with cycle-appropriate clothing.  We were ready to face the brisk morning air, yet aware that we’d need to slowly shed layers of clothing as we pedalled into the warmth of the day.

Huddling around the warmth of the morning fire, coffee in-hand, we recounted our stories of the ordeal of the previous night.  Gert and Annelize were determined that something had been lurking around their tent, licking at the puddles of rainwater that had accumulated on the surrounding sheeting.  Although there was no evidence of the larger-than-life beast that they imagined was prowling out there, their story sounded convincing nonetheless!

Journeying into a charge.

Following a hearty breakfast, we gingerly set out on our unchartered course for the morning, the sun now well above the horizon and Marius in the lead.  Our morning cycle took us onto a manmade ridge that served as a dam wall, now reduced to little more than a watering hole in the dry winter months.  Positioned atop the ridge we were able to quietly survey the scenery for any animal movement.  By now it was already well after 9am.  An iconic African fish eagle eyed us from its elevated perch in a nearby tree.  A fleeting glimpse of the elusive honey badger (or ratel, as they’re called in South Africa) caused much excitement between our little party of five.

It was then that Marius, who had been quietly assessing the scene, firmly called us closer and instructed us to hastily follow him, riding as fast as we possibly could.  It turns out a female elephant that we’d spotted earlier with her young calf had followed us and was emerging from the thick bush not too far from us.  Of all the animals we may have encountered, this was the one of which Marius was most wary.  She had taken a disliking to our presence and was now determined to get us off her turf.  Without the luxury of time to look back to see where she was or how fast she was approaching, we tucked in behind Marius.  We careened down the steep slope of the dam wall in an effort to get us out of this agitated mama’s sight, putting as much ground between her and us.  After an adrenalin-induced ten-minute push on the pedals Marius looked back, now at ease that we were sufficiently distant from the edgy “ellie”, as they were affectionately referred to by the locals.

Settling for a more sedentary pace.

After our little ellie rush, the remainder of our morning ride was comparatively benign, but no less varied in terms of terrain and passing beauty.  Although we didn’t see large herds of animals we did encounter kudu, impala, zebra, wildebeest, giraffe, amusing warthog, skittish duiker and the odd solitary black backed jackal on the hunt.  Being winter, many of the migratory bird species had headed north to warmer climates, so even birding was scarce.  We still enjoyed seeing helmeted guinea fowl, starlings, numerous captivating lilac breasted rollers, and even the odd secretary bird and kori bustard.

I smell a cat.

The Cycle Mashatu outfit have created such a good balance between cycling and pampering.  By 10.30am we were conveniently intercepted at a shady acacia tree by Jupiter driving the 4×4 cruiser.  We were about to have a much-welcomed snack when Marius commented that a leopard had been seen some 20 minutes away.  We deserted our bicycles in the shade of the tree, bundled into the cruiser and headed for the believed location of the elusive cat.  Trying not to get our hopes up, we arrived at the spot where the leopard had last been seen.

After scouring the area, Marius suddenly picked out its location as it popped its head up when it emerged from a dry river bed.  The adult cat was regal to behold as it settled itself down in the shade of some low scrub, almost unnoticeable.  Wary of our presence, its momentary rest was cut short when it decided our 4×4 was edging too close for its comfort.  Within moments it disappeared back into the river bed.  We were thrilled by this unexpected detour from our wilderness cycling itinerary!

Returning to the location of our abandoned bicycles, we eagerly tucked into our heaven-sent wilderness refreshment and nature break beneath the dappled shade of the acacia tree.  Re-energized we mounted our saddles and meandered back to camp for a slap-up lunch and much-welcomed shower.

During a similar mid-morning break beneath the sprawling span of a Mashatu tree on the following day, our refreshment break was, again, curtailed.  This time by a herd of elephant that manifested themselves seemingly out of nowhere.  With near deafening silence this herd of giants, nursing numerous young, quietly emerged out of the nearby bush.  These gentle giants sauntered by our picnic spot, haphazardly grazing on grass and scrub leaves, while we confined ourselves to the safety of the 4×4, mesmerized by the passing parade.  After 30 minutes the lackadaisical herd had moved on and we could continue with our cycle.

These morning rides on Day 2 and 3 saw us clocking up an easy 17 kilometres per day.  Hardly a tough cycle session, but sufficient to have felt like we’d had some exercise, covered some ground, and enjoyed some unique aspects of creation.

Afternoons with Cycle Mashatu was unscheduled time.  It provided an opportunity when we could either go for another cycle, take a nap, read a book, or sit quietly enjoying the view of the Limpopo riverbed.  We opted for the quiet sitting or reading!  It was during these times that we got to enjoy seeing bands of barking baboons playfully crossing the dry riverbed.  Even the odd lone elephant was seen wandering, carefree, across this international natural border.  But mostly, it was a vista of tranquility.  It also afforded us some rich visiting time with our travel buddies.

On the evenings of both Day 2 and 3, as the sun began to dip towards the horizon, we were ushered onto the back of the 4×4 and taken to remote locations.  In both instances they were elevated rocky outcrops that offered unobstructed views of the surrounding grasslands.  Here, we were able to enjoy sundowners as the wintery sun sank out of view, giving way to the star-studded African sky and night sounds of the bushveld.

Our second and third nights in camp were somewhat calmer than the furore of the first night.  Generous, hearty, bush-prepared, multi-course dinners by understated, friendly staff.  Embellished stories and recaps of the days’ highlights around the campfire.  Night caps.  The distant roar of a lion.  The chant of a hyena.  The bark of a baboon.  Key ingredients that create nostalgic outdoor and life-long memories!

Breakfast in the bag.

On our final morning in the bush we were introduced to a most unusual yet memorable camping breakfast.  As we packed and gathered our luggage to load into the 4×4, Sadi, our angel-in-waiting who had prepared most of our meals, was setting out our breakfast ingredients beside the campfire.  All were very familiar omelette ingredients.  However, the method of preparation had a unique – and convenient! – camping spin to it.  Here’s the low-down:

The awesome benefits of your breakfast-in-a-bag is that you can pre-prepare all the ingredients at home and bring them camping with you in sealed bags (except for the eggs, of course!).  The only utensils you require are a large cooking pot to boil water, disposable plates and eating utensils.  No pans, spatulas, cooking oil, chopping knives, graters … it’s awesome!  A list of my recommended ingredients include:

Sadly, all good things come to an end.  And our four-day bushveld sojourn came to an end far too soon.  Following our hearty breakfast, we mounted our trusted pedal-powered steeds for the last time and headed back to the border meeting point.  We still took time to revisit some locations en route that were now becoming familiar landmarks to us.

We had an uneventful but nostalgic eight-kilometre ride from the tented camp back to the thatched boma where we had first met Marius and the Team on our arrival some 72 hours prior.  Here we were able to shower, change our clothes, leave our bikes with Marius and the Cycle Mashatu Team, and bid our fond farewells to the staff who had served us impeccably well.  We could not speak more highly of how they had spoiled us and how proud they are (and rightly so!) of what they do to contribute to conservation awareness in their great country of Botswana.

For a sampler of some of our rides view video footage on our YouTube Channel.

From here we returned to our vehicle after passing through border control, once again with no fuss, before embarking on the long return journey back to Johannesburg.

Thank you, the reader, for coming on safari with us by reading this blog.  If you liked hearing about our travels and want to see more of this type of content, please LIKE (❤️) this article in the reply section below. Check in with us for more of our overseas travel adventures at the end of every 31-day month! 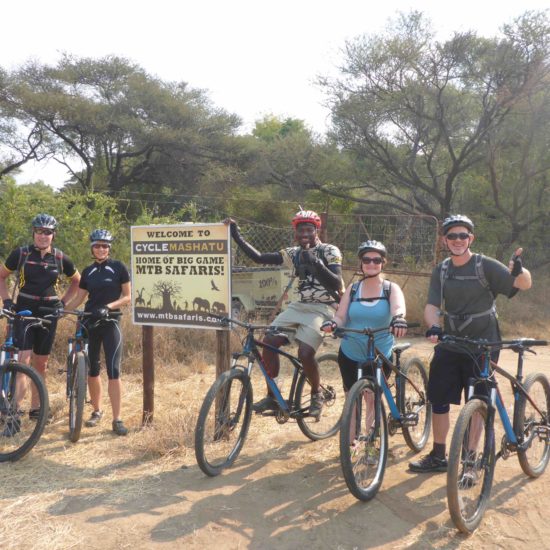 Promoting A Culture of Respect: The Shoe Project 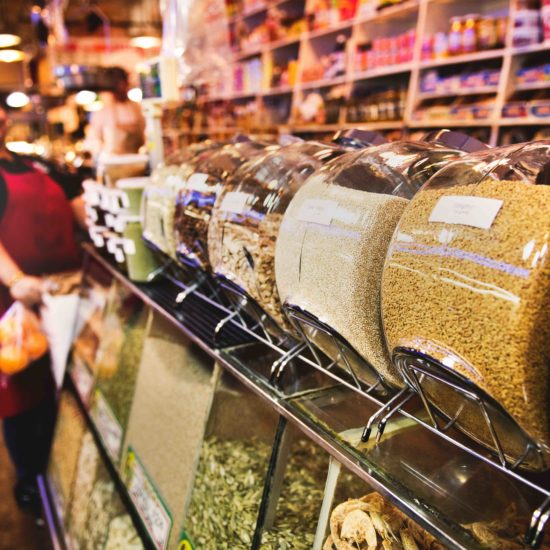